For the first time in its six-edition lifespan, the Automobile Journalist’s Association of Canada’s EcoRun green driving event made its way to the Maritimes. We joined 18 other Canadian journalists in New Brunswick to sample a host of cars with all manner of d powertrain variety: EVs, hybrids, diesels, traditional gas engines and even a hydrogen example started out in the Province’s largest city, Moncton, and ended, three days and about 570 circuitous km later, in the capital city of Fredericton. Stops along the way included a hill which you descend, but that actually has you feeling like you’re ascending it (a natural optical illusion), the quaint, picket-fenced and wonderfully kitchy town of St. Andrews, the coastal town of Saint John and a number of other stops in a Province that packs a lot in to its 80,000-odd square kilometres.

Quaint it may be, but New Brunswick is serious about it transportation initiatives; 31 level II EV chargers and 18 Level III fast-charge units have been installed since last year. It’s also the fastest-growing EV market in Canada, according to New Brunswick finance minister Cathy Rogers. Hosting this year’s EcoRun, then, was a natural fit for the Province.

“This is really important work that (AJAC and EcoRun) is doing, telling the stories of these vehicles,” said Dawn Arnold, mayor of Moncton. “We’ve been a bit reluctant in New Brunswick. But now that we’re putting the infrastructure (for EV vehicles) in place, we can do more.” 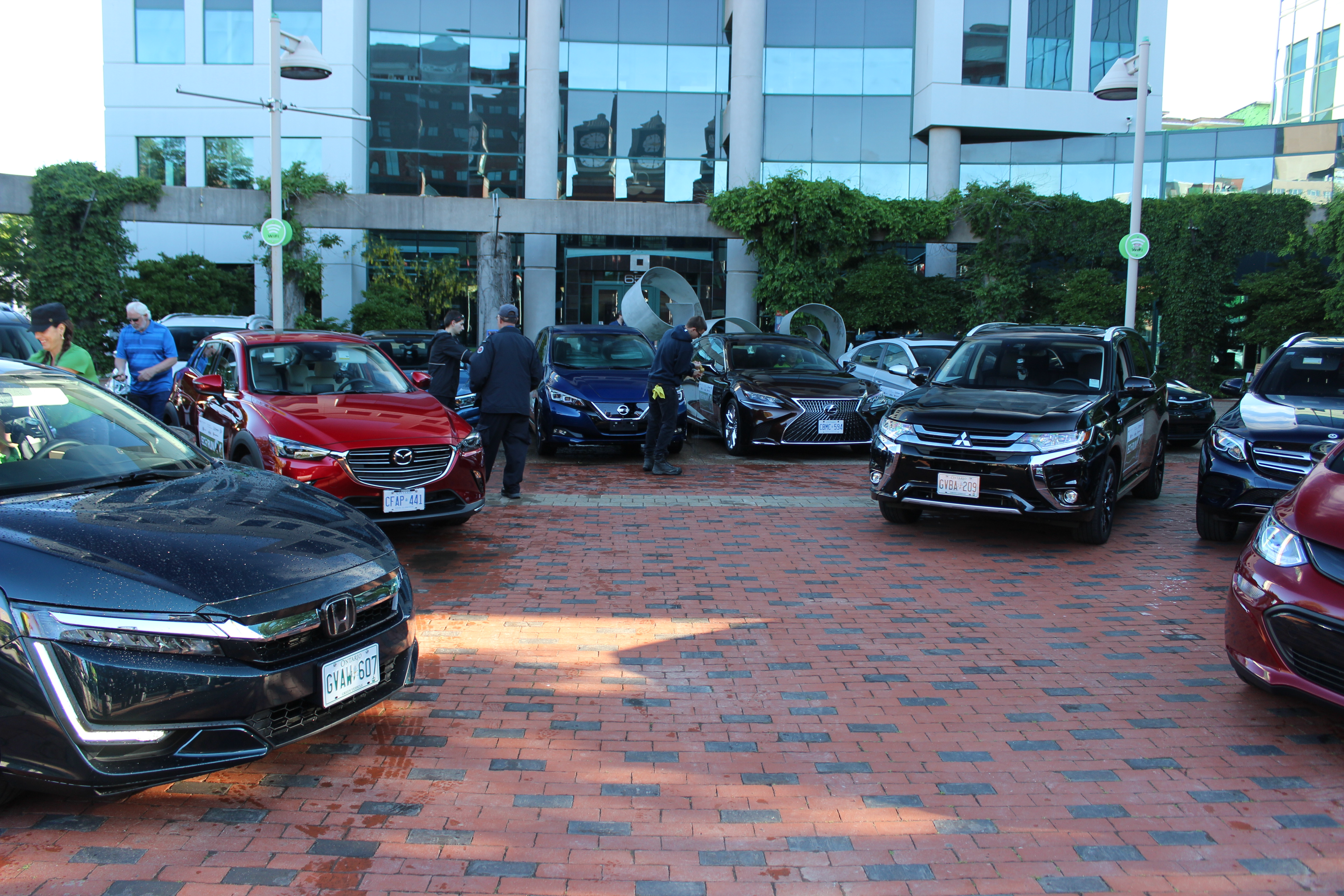 And do more they are; in addition to the fully-connected charging infrastructure NB has completed over this last year, a number of Provincial parks including Mactaquac, New River Beach (which the EcoRun would pass through), Parlee Beach and the Hopewell Rocks will soon have charging sites. In addition to showing their commitment to fuel-efficient and EV motoring, the addition of a fully-connected charging network – and the expansion to the parks – is a boon for the Province.

“As we attract more tourists to our main sites, they can feel confident that they can charge their EV,” said Rogers.

“Our government’s commitment to fuel-efficient vehicles and our actions to invest in supporting the needed infrastructure speaks volumes to what we can achieve when we work together.”

While we were looking forward to experiencing all that NB has to offer, the stated goal of the EcoRun is to inform customers of alternative-power options, and to perform accurate, real-time fuel economy testing. It would be interesting to see how close we could stay to the various manufacturers’ claimed fuel economy figures and EV range claims.

After spending time in six of the 20 vehicles (the Hyundai Ioniq plug-in, the Honda Clarity plug-in, Chevrolet Equinox diesel, Ford EcoSport, Nissan Kicks and Chrysler Pacifica plug-in) at the event, I found that achieving those numbers weren’t as hard as I originally thought, and I could in fact exceed them with just a few tweaks of my driving style. The Ioniq EV, for instance, ended up providing the exact EV driving range (45 km) the computers claimed at the outset – believe it or not (although I’m sure you do believe it), this is not always the case. 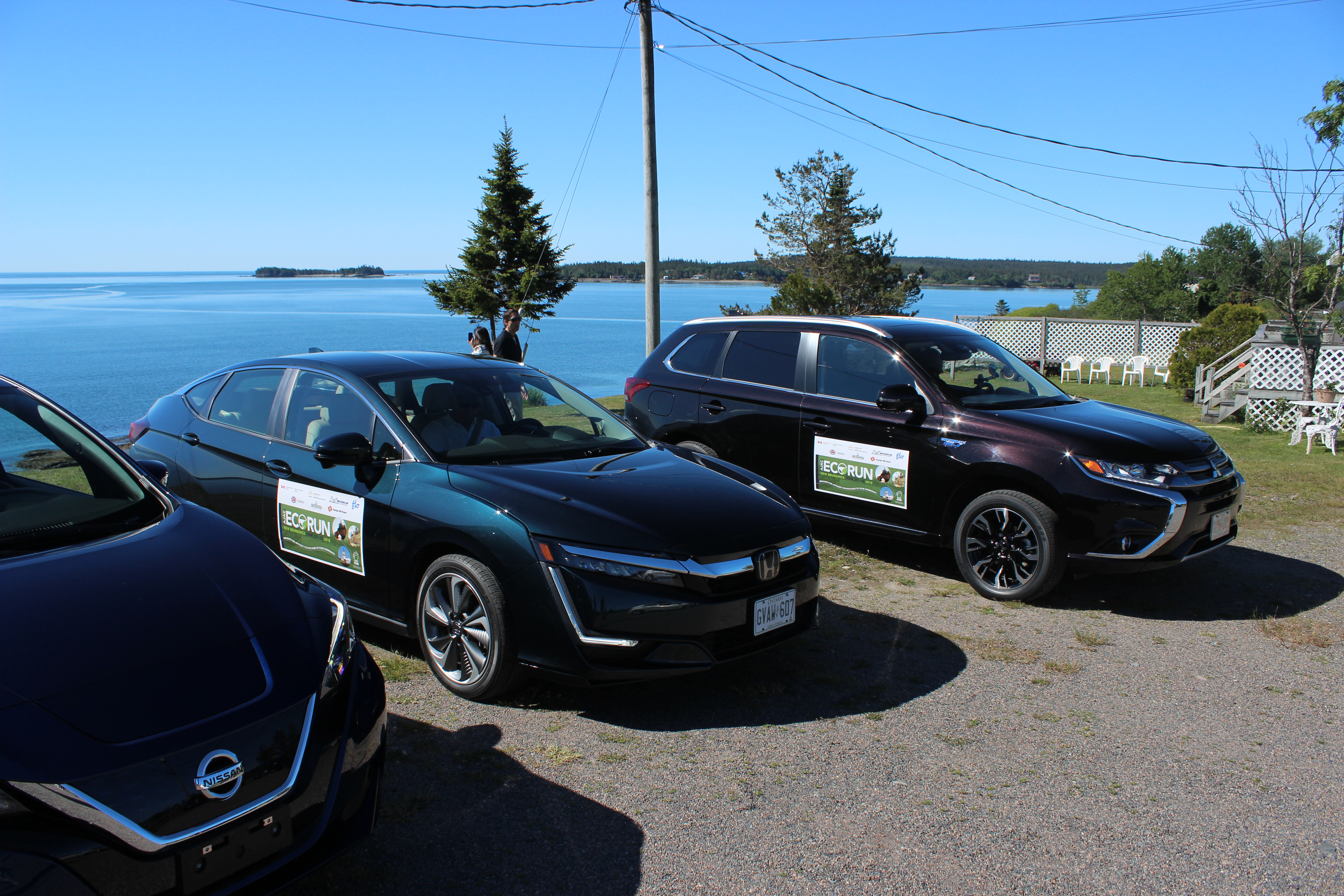 The Clarity PHEV impressed even more, actually providing a bonus of nearly 10 km of EV range than that which it claimed as we started out; we saw 63 km total, even though the computers said we’d only get 54 km at the beginning of our journey. The beauty of the EcoRun, though, is that since we’ve got so much time behind the wheel on relatively open roads, we’re able to not only focus on how quickly we can deplete the batteries of the various EVs, PHEVs and hybrids we’re driving, but on their on-road re-charging dynamics, too. It’s often forgotten how important that aspect of these vehicles is. The Clarity provides a “full Hybrid” drive mode that focuses on re-generating power as you drive, and we saw a regeneration of roughly 2 km of range per every 1 km driven. I’ll take a 2-for-1 deal like that in a heartbeat. The Ioniq and Pacifica, however, were less impressive in that I saw no power regeneration at all when behind the wheel. That’s concerning, obviously, and while the Ioniq can be forgiven in that it’s a vehicle meant to thrive in the city where there’s more opportunity for regenerative braking and so on, the Pacifica is a much more road-trippy car that needs to handle itself on the highway. Having said that: while we may not have gotten much EV range, we managed 7.0L/100km of fuel usage during our 111 km journey thanks to the Pacifica operating as a hybrid even though we couldn’t get full-EV cruising. Granted, most road-tripping Pacificas will likely be more heavily laden than my car was, but I was nevertheless impressed by the figures.

Perhaps equally impressive, if not more so, was the Equinox diesel, standing as the sole representative of diesel power at this year’s event. Heck, it’s one of only a few representatives of diesel-powered passenger vehicles in our country as a whole, but I digress. It just so happens that I covered more clicks in the Equinox – 135 – than any other car, so I was happy to see I’d averaged just 5.1 litres per during the journey. It may be a little too rattly and diesel-like in its mannerisms, but if you’re planning on driving a lot and are looking to save fuel, it shows that diesel power still has a place, even amongst all the other, much newer, powertrain tech we were seeing at the event.

The last two cars I sampled were the Ecosport and Kicks, two vehicles that are as close to each other in almost every way – from the styling on down – as anything else here. So close, in fact, that I saw 6.1 l/100 km in both cars, over a similar distanced travelled. The Ecosport gets a bit if an asterisk in that I had a passenger with me during that drive and the extra weight likely made it drink a little more fuel, but the two are so close together that you’d have a hard time choosing between them if you were going on fuel economy (the Ecsport as a 1.0L turbo three-banger, the Kicks a 1.6 litre four). Better you focus on the drive, and while they’re similar here, the Ecosport exhibited a slightly more brittle ride than did the Kicks. How you feel about the Ford’s barn door-style tailgate is another matter. 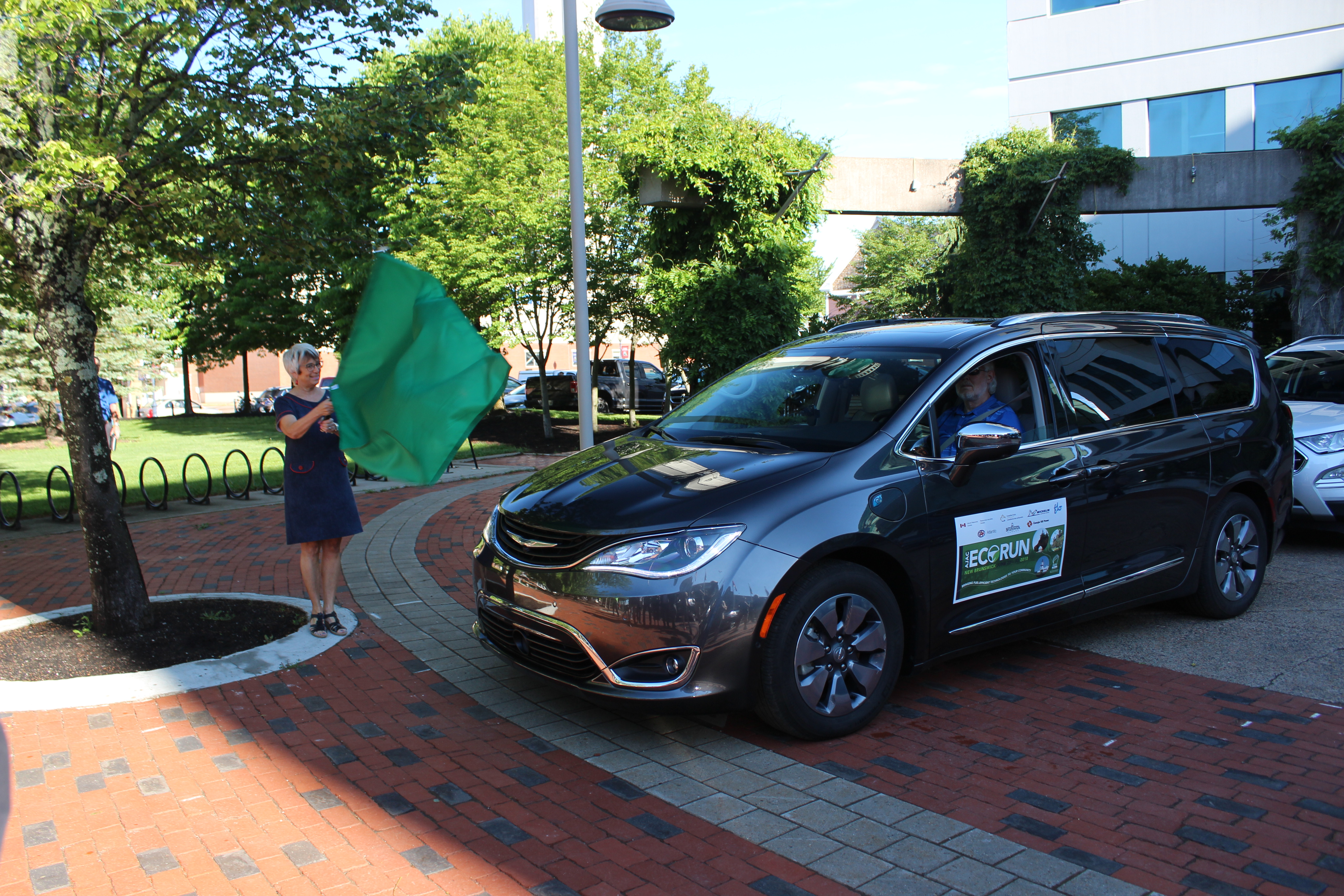 Of course, we weren’t really here to do a comparison test; this was about how these cars and SUVs performed in the real world, and it’s safe to say that they pretty much all exceeded my expectations. I saw better fuel economy on all of them – every single one – than the manufacturers claimed, and the only nod to hypermiling I did was occasionally keeping the windows closed and the A/C off. Otherwise, this was a normal drive at the speed limit on highways and backroads with rolling hills, and that’s all there is to it.

If I did have to pick a favorite lesson, though, it’s just how good a plug-in hybrid can be. Sure, the Clarity struggles a bit with a small gas engine when it has no charge, but in hybrid or EV mode, it’s a perfectly competent highway cruiser that has the added benefit of being able to plug it in at the end of the day. Same goes for the Ioniq, which adds fun stuff like a paddle-operated transmission and nimble handling to its repertoire.

I guess I’d also have to give a nod to the Equinox diesel, and its ability to smash its own manufacturer’s fuel claims. It’s an excellent choice if you still believe in diesel power, and many still do.

As far as the locale goes? It’s worth a visit, a bit of a diamond in the rough surrounded by the somewhat more well-known quantities of Nova Scotia and Newfoundland. If you’re going to be in the area, New Brunswick is absolutely worth a look.

© 2021 WomanAndWheels.com - All Rights Reserved | Powered and Designed by NetMedia 360 Inc.